The Last Jedi: Just Another Roll of the Dice

If you don’t understand that subtitle, than there’s a good chance you’ve been disappointed with any Star Wars film released since the original trilogy. I guess that’s a bit snooty-sounding, isn’t it? But here’s the thing: ever since The Empire Strikes Back (1980), “old school” Star Wars fans have had a problem with each film released…one after another. Star Wars: The Last Jedi is no exception. In fact, there’s never been a more divisive Star Wars film among fans. Plenty has been written about that already. Yet, no one is talking about the effect of the Star Wars role-playing games (RPG) on the movies. Ever since Watto rolled that chance cube in The Phantom Menace, I felt a presence in the storytelling that I have not felt since my high school and college days conducting Star Wars RPG campaigns in the late 80s/early 90s. It was a delightful yet little surprise that some of the writers of the animated Clone Wars TV series said the SW RPG sourcebooks were their FAVORITE Star Wars books out of the dozens of canon and non-canon books out there. And now, we’re watching Star Wars films that look and feel a heck of lot like the West End Games role-playing game…and some fans don’t know just how cool that really is.

Roll Mechanical: Astrogation 2D; Difficulty 5
In the midst of all the internet fury about Last Jedi being the best (or worst) Star Wars film ever, my college roommate and one-time Star Wars RPG player texted me out of the blue, “What do you think Luke rolled for his Con at the end of The Last Jedi?” This, of course, made me laugh. My mind raced back to watching The Force Awakens on opening night with him and my reunited old college SW RPG group. At the end of the scene where The Falcon flies through the Starkiller shield, crashes through trees and skids along the snowscape to the very edge of a cliff, one of the group whispered “Han must have rolled a 20.” Nerdy? You bet. Funny. Yes. And dead on. But why is this relevant? Because it’s no secret that the generation that grew up playing D&D and other RPGs are now working in the creative force of today.  Those RPG-nerds are also consuming the content, too, and can see the beauty in it. That’s why shows like Game of Thrones and Stranger Things have achieved the audience most TV Executives crave.

Roll Knowledge: Cultures 3D+1; Difficulty 15
If you never played an RPG, let me be as brief as I can be in my explanation (or you can just watch the first episode of Stranger Things). The game is played with a group of people portraying fictional characters. Each player has a character sheets that list abilities and skills of their character. With the West End Games version of SW RPG (and many other RPG games), the skills were connected to die codes. The Gamemaster (GM), the leader of the game, directs the players on what’s happening by telling an interactive story called a “campaign” with challenges that the characters need to complete. This occurs through give-and-take dialogue between GM and player(s). Imagine this:
Player: “Can I shoot that Stormtrooper?”
GM: “Sure. He’s across the street. Easy hit. Roll Blaster. What’s your die code?”
Player: “My Blaster skill is 3D.”
GM: “Difficulty: 5. Roll.”
[This means the player must roll three 6-sided die. If it totals 5 or more, he hits the stormtrooper. If not, he misses. Either way, the GM needs to react with more storytelling.]
Player: “Crud. I rolled 3 ones.”
GM: “Okay. You miss. Then he turns to you, reaches behind him and pulls out a lightsaber.”
Player: “Did you just say a lightsaber?!” 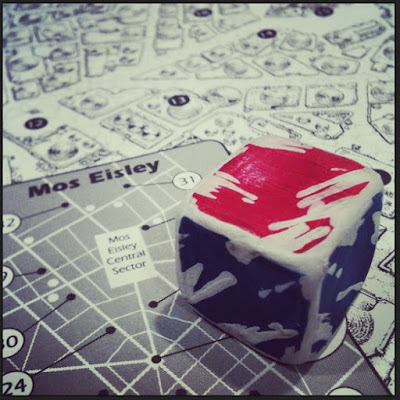 Use Force Points: This One Will Be Difficult
While RPG companies would sell pre-written detailed campaigns for the GMs, the original campaigns were always far more entertaining…and challenging for kids to write and conduct. As a GM, I would often throw in a random, off-beat challenge in my campaigns that my group had to complete in order to move the story along. This challenge might introduce a non-player character (NPC) that I would "act" as and would be needed later in the overall campaign. A good GM would always tie this diversion back to the story somehow. “Okay, you didn’t meet the contact you were supposed to meet…” many a gamemaster has uttered, “…but you did meet this strange character who just may be able to help you…”
If you’ve seen Last Jedi, this should sound familiar to you.
Roll Technical: Repulsorlift Repair 2D+2
Do I think every director – including Lucas with the prequels – played SW RPG and is writing and directing these post-Original Trilogy films like a SW campaign? Of course not. However, SW RPG players should be able to appreciate the fact that these films are more like a RPG campaign than any of the Original Trilogy films…or even an Expanded Universe books of old. Does this RPG slant make these films better? Not necessarily. Their films structures are surely different (one screenwriting seminar I attended claims The Force Awakens is an 8-act structure consisted of eight 15-minute mini-movies that make up the overall feature).  But it makes enjoying these “new” films a lot easier. In The Phantom Menace, Obi-Wan and company are stuck on Tatooine with engine trouble. Eventually, some of them are involved in a podrace to win prize money to “get the parts” needed. In classic screenwriting terms, the podrace and time on Tatooine may seem superfluous. Delete it.  But in RPGs, the podrace makes total sense. The characters are faced with challenges based on decisions they made (“We must leave Naboo and get the Queen safely to Coruscant.”) and they have to do something they didn’t plan on in order to complete the mission (“Our hyperdrive is damaged. We need to land somewhere for repairs. But we have no money. What are we going to do?...)
Roll Con (under Perception) 4D; Difficulty 20
A film buddy who never played any role-playing games asked me (via text) to describe The Last Jedi in one word. I struggled with this request but only came up with “re-watchable” – as most fans of the film would agree. The second screening seemingly convinces us that we not only like this new Star Wars film, we really like it. But my film buddy texted me back, “Schizophrenic.” And I totally see why he would say that. It jumps all over the galaxy. It asks the audience to care about a wide range of characters and situations. Even the cinematography changes from scene to scene. The first battle in the film is told in shots that feel more like a comic book than a film. Later, it gets artsy with Rey’s time on Ahch-To. Then, jump to silly comedy. Return to intense darkness. To someone expecting a three-act structure – or even an eight-act structure, this must be incredibly frustrating. But, for an old, retired Gamemaster like me, it makes sense. Keep 'em guessing, as my Old Man used to say. Structure aside, the film has a lot to accomplish. Fans went into Last Jedi expecting answers and they walked away with more questions. But this isn’t the final film, it’s the middle one. There’s still time to provide answers and tie up loose ends in Episode 9. What Last Jedi did provide is new parts to the overall story: new characters, new challenges, new planets, new Force skills and so on. And, it left room for us to return and march into the next part of the adventure. This is Gamemastering 101. Keep it fresh while keeping it familiar. And be sure to pace the adventure to keep us entertained and guessing what’s next in the ongoing story.
OK. Ready for Skill Points?
At the end of each game, players are rewarded with skill points. These points are “spent” on improving their characters individual skills. The best players ask the Gamemaster for advice on how to spend their points. And the best Gamemasters would tease where the story is going in order to help the player determine what skills they should raise. I would say things like: “You know a daring escape is coming. Your group is trapped on a prison floating in space and needs to get to Yavin 4 before it's too late. Up your Blaster and Sneak.” The Last Jedi guides us as players and hints as what will come in Episode 9 with the dialogue of Luke Skywalker, looks from Rey and Finn (towards other characters) and other film devices. We know what’s coming to a degree – we just have to wait till next time to see how it all plays out. So, sit back and relax. It’s going to be okay.
Oh, and one final note (and small spoiler), the dice in this Star Wars film are, by far, the coolest dice I have ever seen in the Star Wars universe. I want them. 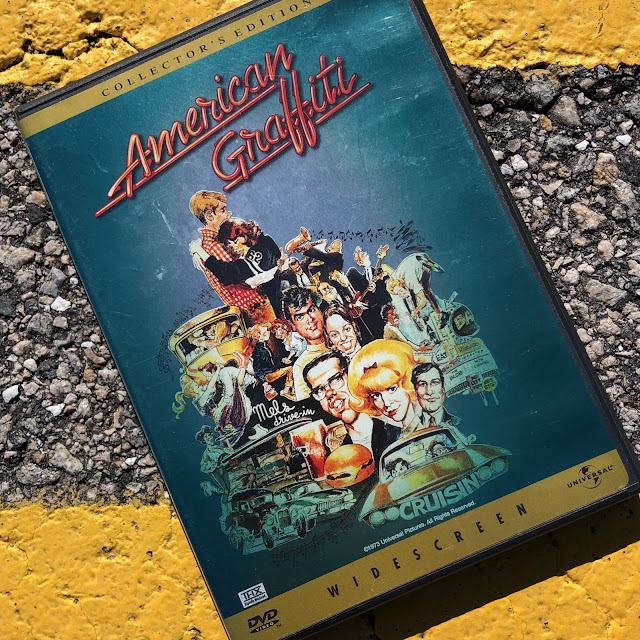 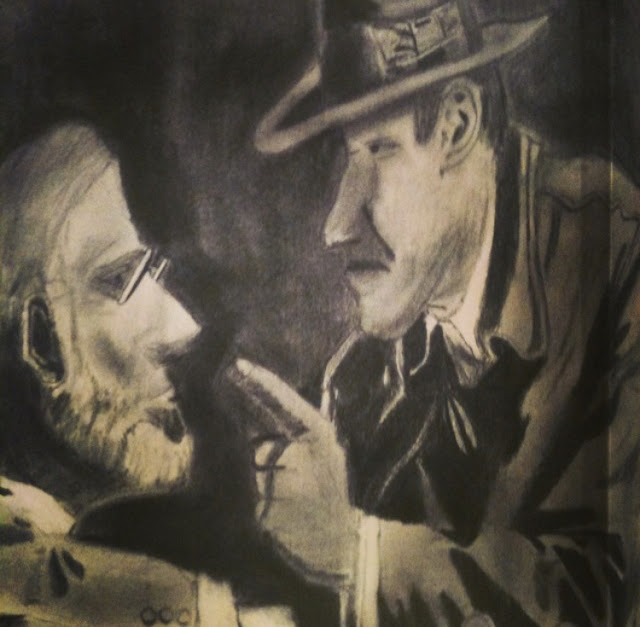 INDIANA JONES AND THE LAST CRUSADE (1989)